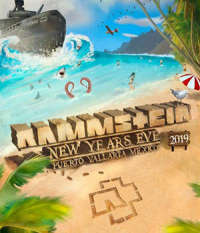 Rammstein has just announced two concerts in Mexico on December 31, 2018 and January 2, 2019. They will take place on the beach of Puerto Vallarta (Mexico's Pacific Coast).

The band also revealed that these concerts will be the only ones for 2018. At this time, the band is in the final phase of the production of their 7th studio album which will be released before the end of the year, so Mexican fans will very likely be the first to hear the new songs.

Tickets will go on sale June 27th on the Stubhub website.
The North America Tour 2020 will be postponed Photo book Ausländer The 2020 Europe Stadium tour is officially rescheduled to 2021 The making of a photo session for the last album New book by Till Lindemann and Joey Kelly Documentary with Flake and Joey Kelly on Arte.tv Rammstein's Europe Stadium tour 2020 will not take place New official communication about the 2020 tour 2020 tour: Rammstein is monitoring the situation Official statement regarding Till
Back to top