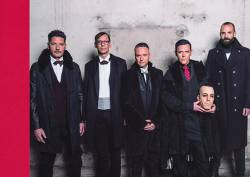 On March 28, 2019, Rammstein made their comeback with the video for Deutschland, directed by Specter Berlin. The reviews were unanimous and the video instantly became a masterpiece, smashing YouTube view records.

The 143-page book shows photos taken by Erik Weiss, Axel Roschlock and the director himself, Specter Berlin, during the shooting in January 2019. Texts written by Specter Berlin and Flake are also present.