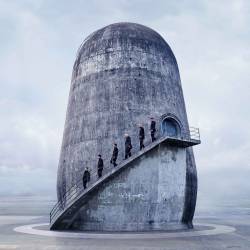 Zeit is the eighth album by Rammstein. Its release date is set for April 29, 2022.

Like the previous album, Zeit is co-produced with Olsen Involtini and was recorded at La Fabrique Studios in Saint-Rémy-de-Provence, France. The artwork is based on photographs by Bryan Adams, who had previously worked with Rammstein for ZOO Magazine.

The first hint of an eighth Rammstein album is made by Till in an interview with Russian magazine ЖAРA. While the seventh album is not even released yet, here is what he states:

I don't think this is the last album. We worked so hard, we have so many songs, that we are ready for the next album.

From this point on, it is clear that Rammstein has composed more songs than the 11 present on their seventh album. This information is confirmed by Schneider in June 2020, in a show on Radio Bob! He adds that the band members will take advantage of the lockdown to work on more additional songs.

In September 2020, the band members are spotted in Saint-Rémy-de-Provence, at La Fabrique studios, where the previous album was also recorded. Rammstein confirms the information on October 7 when two photos of the band in the studio are posted on social networks.

On February 5, 2021, in an interview with Motor.de, Flake confirms that an eighth album is born from the 2020 sessions:

The fact that we couldn't perform live increased our creativity. We had less distractions and more time to find new things. So we recorded a disc that we hadn't planned.

On March 31, 2021, composer Sven Helbig posts a photo on Instagram where he is seen working with Ollie and producer Olsen Involtini on recording orchestral parts: Rammstein’s upcoming album. It is the 5th album I am contributing to already. On the last 4 releases, I arranged bits of choirs, strings, horns, yodel etc.

The promotion of the album Zeit starts on March 10, 2022, together with the release of the video for the eponymous single. The album, its formats and covers are announced, but the tracklist is not yet revealed.

In order to reveal the album's tracklist, 11 "Zeit" capsules have been hidden by Rammstein around the world. On March 25, 2022, the GPS coordinates of the capsules are revealed. Each capsule, once found, gave access to a code allowing to display the name of one of the songs of the album, as well as the possibility to win 2 tickets for a concert of the 2022 tour, including transport and accommodation.

The international release date for Zeit is April 29, 2022, with the exception of the marble blue Double LP edition, which is set for May 6, 2022.
All music & lyrics by Rammstein: Christoph Doom Schneider, Oliver Riedel, Doktor Christian Lorenz, Paul Landers, Richard Z. Kruspe, Till Lindemann

Produced by Olsen Involtini with Rammstein

Ok
Performed by the Academic Choir Of The National Television And Radio Company of Belarus, Minsk
Conducted by Wilhelm Keitel
Session recorded by Ozmitry Karshakevich and Siarhei Chaika at Studio of the National State Teleradiocompany Belarus, Minsk