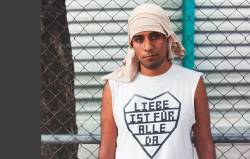 In 2009, Rammstein released their sixth studio album Liebe ist für alle da and began their tour of the same name. After a long break of over ten years, the band played in America again. From the north of Canada to the very south of Mexico, over 150,000 fans came to see Rammstein in concert.

The 144-page photo book Liebe ist für alle da retraces the tour thanks to Frédéric Batier's photos. A large part of the book is dedicated to the fans, but there are also photos of the band on stage. A poem by Till Lindemann is also present.