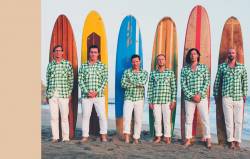 During the US leg of the tour for their sixth album Liebe ist für alle da, Rammstein shot the music video for Mein Land, directed by Jonas Åkerlund, at Sycamore Beach in Malibu on the May 23rd, 2011. Mein Land was released on December 2nd, 2011 as part of their greatest hits album Made in Germany 1995-2011.

This 104-page book features photos from the shooting by Frédéric Batier.