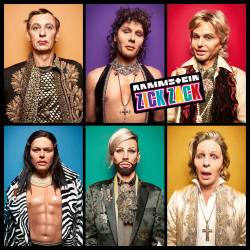 The digital version was released on April 7, 2022. A physical release followed in two formats: magazine (with 2-track CD included) and 7-inch vinyl. In Germany, Switzerland and Austria, the physical formats were distributed exclusively on Amazon and the RammsteinShop from April 13, 2022. In the other countries, they were be distributed via the usual Internet and retail channels, with different release dates.

Special thanks to Joern Heitmann

A Vertigo/Capitol release; ℗ & © 2022 RAMMSTEIN GBR under exclusive license to Universal Music GmbH, Stralauer Allee 1, 10245 Berlin. All rights of the producer and the owner of the recorded work reserved. Unauthorized copying, hiring, lending, public performance and broadcasting of this record prohibited. Made in the EU.
BIEM/SDRM. LC 14513. 0602445538010