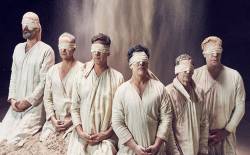 Zeit is the first video from Rammstein's eighth album, Zeit. It was released on March 10, 2022 on Youtube at 5:00 pm CET and was directed by German director Robert Gwisdek (also known as Käptn Peng), who had never worked for Rammstein before.

The video was announced on March 8, 2022 on Rammstein's social networks. It served the band as an introduction to their album Zeit.

Zeit is about the passage of time and how death can occur at any stage of life.

On March 9, 2022, the day before the video was released, production company Kreisfilm made a post on Instagram explaining that the cover of the single Zeit, taken from the video, was produced without special effects: By the way, nothing in this image is digitally altered. No Cgi or compositing. Just Olli and a ton of sand. (And no stunt crew) They took it like champs.

In an interview with Chaoszine, Richard said he was injured during the shooting of the video:

I just had a little accident. We were shooting a video. There was this super tank pool slash where you can shoot in water. And I was set to jump in three meters high. Everyone had jumped down to kind of film where we going down under, and I was jumping on my other guitar player’s ass. [Laughs.] My foot is destroyed. I can’t really walk around with just– so I have to have to be very cautious about my right foot at the moment