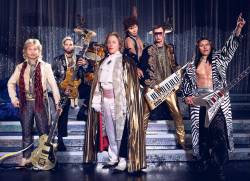 Zick Zack is the second video from Rammstein's eighth album, Zeit. It was released on April 7, 2022 on Youtube at 6:00 pm CET and was directed by German director Joern Heitmann.

In Zick Zack, Rammstein play a self-deprecating role as an old band whose members are addicted to plastic surgery. They play to their audience of elderly people only. The singer has a problem with his face and has to have it "fixed" backstage by his plastic surgeon.

The backstage scenes were filmed at the Tworki Hospital in Poland. The scenes in front of the audience were shot at the Sabat Theatre in Warsaw. The band found this theatre on the Internet, before sending their assistant to scout it. His feedback was very good and the theatre was rented for the shoot. The director of the theatre Małgorzaty Potockiej and her dancers were offered a role in the video. The filming lasted for 3 days during which no one could enter the theatre without permission, in order to avoid any leakage.

The promotion started on April 1, 2022, as an April fool's joke. The band's social networks posted the following announcement, accompanied by a visual of a clinic in Rammstein's colours, on which an image from the video can be seen:

We are very happy to reveal a well-kept secret today and announce our early-stage investment in a cutting-edge company: The Zick Zack Beauty Clinic in Berlin!
Rammstein are super excited this project is finally going live. “Prettier, bigger, harder" - become the best version of yourself!
Appointments will be available soon!

After only a few minutes the announcement was deleted, but Rammstein had sent the following press text to the media, intended to create a buzz:

The world-famous German band, Rammstein, has invested in a newly-founded beauty clinic in Berlin’s central Mitte district. The brand-new clinic is renowned for treatments like microblading, lashlifting, removers, botox and fillers. Bigger and more invasive surgery is not an issue at the hands of Prof. Dr. Klarerschnitt and his team – fresh from their experience in Tegernsee (Bavaria) – in their state-of-the-art operating theatre

On April 3, 2022 at 10:00 a.m. CET, the microsite zeit.rammstein.de and the band's social networks began to broadcast visuals of each member of Rammstein as if they had undergone a large number of cosmetic surgeries. Till and Ollie were revealed first, then Richard and Paul at noon and Schneider and Flake at 5pm.

The day before the video, on 6 April, the official trailer was posted on Rammstein's official YouTube channel:

Thanks To
Sabat Theatre
Tworki Hospital
The whole beautiful cast

Music and Lyrics written by Rammstein

Produced by Olsen Involtini with Rammstein