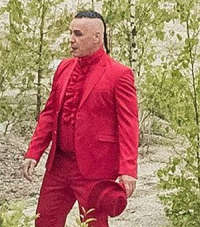 On June 12, the day after the Rammstein concert in Tallinn, Estonia, Till Lindemann was seen in Rummu karjäär for a video and photo shoot.

Rummu karjäär is a former limestone quarry, later transformed into a prison, that is now disused. A team from the Estonian production company CineUnit, and Zoran Bihać (who filmed several clips of Rammstein and Lindemann in the past), accompanied Till, dressed in a red suit.

It's difficult to know for the moment if the film will be related to Lindemann, (Till's solo project), or Rammstein.

» Click to see photos of the filming
A forthcoming documentary on the history of the band? Lyrics and translations of the album « Zeit » Single and video for "Dicke Titten" Are you visually impaired ? Come explore the stage! Travel journal for the Europe Stadium Tour 2022 Setlist of the Europe Stadium tour 2022 "Zeit' tops the German and French charts Duo Jatekok and Duo Abélard will be support acts for the 2022 Stadium Tour Video shooting in Paris Official denial about Rammstein's 2023 tour announcement
Back to top