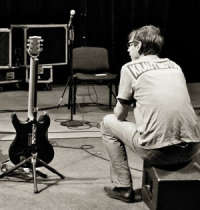 During a recent reading session of his book "Heute hat die Welt Geburtstag", Flake said that Rammstein will return to studio in February 2018. Let's take stock of the situation!

The album is currently in its pre-production phase: Rammstein members play together, come up with ideas and record demos in an informal way. The objective is to have a sufficient number of finalized demos, and enter the studio to record them properly, and mix them. According to Flake, Rammstein will enter studio in February 2018.

During the pre-production phase, Rammstein called in several producers, with the intention of replacing Jacob Hellner (as Paul said, they "want to try new paths"). The only name that filtered out was Sky Van Hoff, with whom Paul and Richard tested their guitar sound. Hence the studio photos published at the time (see news).
.
Beware, this doesn't mean that Sky Van Hoff will be the producer of the next album. Rammstein could very well choose another person.
.
Anyway, according to Flake the album is expected by the end of 2018, with a tour in 2019. We can't wait!
« Nuits silencieuses » will be published on October 7, 2021 "Le jardin des larmes" will be released on October 22 on Zaz's new album Emigrate's fourth album to be released soon Till is shooting the video for the featuring with Zaz Additional show in Prague for 2022 North America Stadium tour 2022 Till feat. Zaz: coming soon! Four additional concerts for 2022 Rammstein Charity Europe Stadium tour officially rescheduled to 2022
Back to top