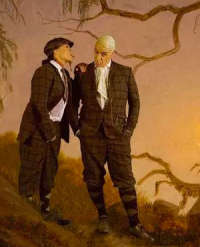 Till Lindemann and Peter Tägtgren are back together, this time for the theatre. The duo wrote the music for the play "Hänsel und Gretel", which will be performed from April 14th at the Thalia Theater in Hamburg.

The play is a modern adaptation of the Grimm brothers' tale "Hansel and Gretel". According to the directors, Peter and Till's music, along with video screens, set the grotesque children's story on a new stage. Perversion, poetry, humour and emotion are mixed. An adult version that shouldn't leave anyone indifferent. Just like Lindemann.

» Thalia Theater website
» Facebook page of Thalia Theater
Video shooting in Warsaw Richard confirms that the new album will be released in 2022 before the tour Reissue of 4 albums in digipack Thomas Pesquet was able to listen to Rammstein's next single « Nuits silencieuses » will be published on October 7, 2021 "Le jardin des larmes" will be released on October 22 on Zaz's new album Emigrate's fourth album to be released soon Till is shooting the video for the featuring with Zaz Additional show in Prague for 2022 North America Stadium tour 2022
Back to top