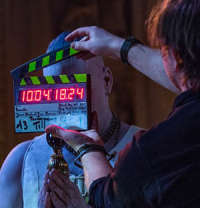 A few weeks ago, a casting of BigFish led us to believe that the director of Rammstein's next video would be Philipp Stölzl, used to work with this company (see previous news).

Today, Rammstein published on his Instagram account a photo taken during the shooting. Zooming in, you can see the mention "BigFish", the date "January 21, 2019" and the name of the director: Jonas Åkerlund. So it will not be Philipp Stölzl. The universe is religious and when you know that the casting was intended to find people who were not afraid to strip, you can imagine that the clip will be sulphurous.

To summarize: the first video from the next album was shot around January 21st by Jonas Åkerlund (Mann gegen Mann, Pussy, Mein Land), and the second was shot on January 26th by Joern Heitmann (Sonne, Ich will, Haifisch).
Rammstein is going to work on new songs The North America Tour 2020 will be postponed Photo book Ausländer The 2020 Europe Stadium tour is officially rescheduled to 2021 The making of a photo session for the last album New book by Till Lindemann and Joey Kelly Documentary with Flake and Joey Kelly on Arte.tv Rammstein's Europe Stadium tour 2020 will not take place New official communication about the 2020 tour 2020 tour: Rammstein is monitoring the situation
Back to top