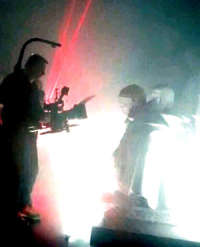 The newsletter of the German newspaper Tagesspiegel tells us that Rammstein recently shot a video clip at the citadel of Spandau. Here is the excerpt in question:

Rammstein secretly shot in Spandau. "Yes, that's right, they recorded their new music video with us," Urte Evert, 44, head of the Citadel Museum, just told us. Here's a first photo. Everything was top secret. "I got the request on vacation, was very happy and immediately accepted. Rammstein shot one day and one night in our citadel, with fog machines in the 'Revealed' exhibition, with close-ups of the big figures, with light show and candles. A fantasy medieval shooting took place in our bastion Kronprinz." The video will be released soon. More than 1000 Euro rent went to the district, but much more important, says Evert, "is the worldwide advertising for the citadel". And: "It's a bit cool when Rammstein discovers Spandau, isn't it?"

At least two other videos for the new album have been shot (see our previous news).
Rammstein is going to work on new songs The North America Tour 2020 will be postponed Photo book Ausländer The 2020 Europe Stadium tour is officially rescheduled to 2021 The making of a photo session for the last album New book by Till Lindemann and Joey Kelly Documentary with Flake and Joey Kelly on Arte.tv Rammstein's Europe Stadium tour 2020 will not take place New official communication about the 2020 tour 2020 tour: Rammstein is monitoring the situation
Back to top