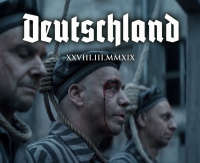 After years of waiting, Rammstein is officially back! Their new video "Deutschland", the first from the new album, premieres on March 28, 2019 on Youtube. The director is Specter Berlin.

The song is a journey through the history of Germany and expresses the love-hate relationship caused by the beautiful and ugly episodes of the history of this country. The video was shot in six locations in and around Berlin, including the former East-German Stasi prison in Keibelstrasse, the Chorin monastery, the Spandau citadel and the former Rüdersdorf cement factory.
The North America Tour 2020 will be postponed Photo book Ausländer The 2020 Europe Stadium tour is officially rescheduled to 2021 The making of a photo session for the last album New book by Till Lindemann and Joey Kelly Documentary with Flake and Joey Kelly on Arte.tv Rammstein's Europe Stadium tour 2020 will not take place New official communication about the 2020 tour 2020 tour: Rammstein is monitoring the situation Official statement regarding Till
Back to top