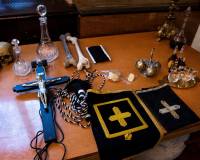 Last January Rammstein published a few photos from a shooting with Jonas Åkerlund. Thanks to an interview with actress Pia Hemstedt, we know that the video is for Zeig dich ("Show yourself").

In Rammstein's new video "Zeig Dich", I play as a nun. The work was both relaxed and exciting. For me, it was like a live concert. As a nun, I was sitting in the front row of a Berlin church, and Rammstein gave a concert in front of me. Rammstein is known for their controversial videos, this motto is applied to 100%.

The release date of Jonas Åkerlund's video is not yet known. You can find the lyrics of Zeig dich on your site.
Berlin Commercial awards 2020 The 2020 North America Stadium tour is officially rescheduled to 2021 Rammstein is going to work on new songs The North America Tour 2020 will be postponed Photo book Ausländer The 2020 Europe Stadium tour is officially rescheduled to 2021 The making of a photo session for the last album New book by Till Lindemann and Joey Kelly Documentary with Flake and Joey Kelly on Arte.tv Rammstein's Europe Stadium tour 2020 will not take place
Back to top