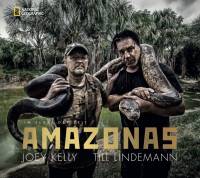 On October 14, 2020 the second book by Till Lindemann and Joey Kelly will be released: Amazonas: Im Fluss der Zeit (Amazon: In the River of Time), still edited by National Geographic.

The two men had already released a similar work in 2017 about their journey on the Yukon in western Canada. Joey Kelly sold over 20 million records in the 1990s with his band The Kelly Family, and is an extreme sports fan.