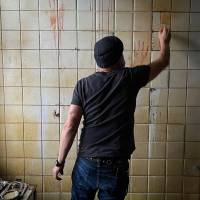 Our sources, as well as several clues on social networks, lead us to believe that Rammstein has been shooting a video near Warsaw, Poland, over the past few days!

Director Joern Heitmann posted yesterday on Instagram a picture of the shooting from the Tworkowski psychiatric hospital near Warsaw. On 24 November, he posted a photo from the city's Palace of Culture and Science during a location scouting trip.

On 19 December, Paul and Schneider were spotted in Warsaw, while Till was photographed with rapper Malik Montana in the cigar bar of a Warsaw hotel. On 21 and 22 December, photos of Paul, Schneider, Flake and Richard were published by Dope Ride, a Polish VIP transport company.

Another video had already been shot in October in Austria. So at least two videos have been filmed for the next Rammstein album, which is still scheduled for release in the first half of 2022.

Video shooting in Warsaw Richard confirms that the new album will be released in 2022 before the tour Reissue of 4 albums in digipack Thomas Pesquet was able to listen to Rammstein's next single « Nuits silencieuses » will be published on October 7, 2021 "Le jardin des larmes" will be released on October 22 on Zaz's new album Emigrate's fourth album to be released soon Till is shooting the video for the featuring with Zaz Additional show in Prague for 2022 North America Stadium tour 2022
Back to top