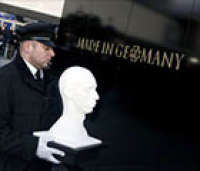 You got the news right! A mausoleum will open tomorrow (November 25) in Berlin to glorify Rammstein. At 3:30pm (GMT+1), a procession composed of people and carriage will be driven up to the mausoleum. Six death masks with the head of the 6 band members will be carried into the building, and the fans will then be able to leave a message in a book of condolences. The mausoleum will also be open on November 26 between noon and 9:00pm.

Of course, that doesn't mean tomorrow is the end of Rammstein. This event actually strikes the beginning of the promotion for Made In Germany 1995-2011 Best of album. By staging its death, Rammstein ridicules the launching of a Best of album, which the fans often believe to be the end of the band.

By the way, the German magazine Rolling Stone, is out today (24 november) including 12 pages about Rammstein and the first interview of Till since 2005.

We just added some photos of the ceremony in our gallery, and a video on our Youtube channel.
The North America Tour 2020 will be postponed Photo book Ausländer The 2020 Europe Stadium tour is officially rescheduled to 2021 The making of a photo session for the last album New book by Till Lindemann and Joey Kelly Documentary with Flake and Joey Kelly on Arte.tv Rammstein's Europe Stadium tour 2020 will not take place New official communication about the 2020 tour 2020 tour: Rammstein is monitoring the situation Official statement regarding Till
Back to top