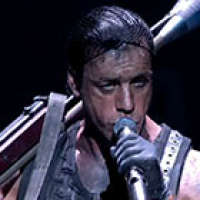 A professional-quality live video is currently circulating on the Internet. It's Waidmanns Heil, filmed in Montreal and New York in 2010, and published by the director of these two concerts. Many fansites claim that this is proof that a live featuring the LIFAD tour will be released.

However, we do believe that the main concert featured in the DVD/Blu-ray will be Paris 2012. Early 2011, plans were to release a LIFAD tour concert. But as Rammstein went on road with the Made In Germany tour, they changed their mind, and decided to shoot Paris with a lot of filming equipment.

As a result, the LIFAD material will not be used, or only as bonus. This was confirmed by members of the band during aftershows.
The North America Tour 2020 will be postponed Photo book Ausländer The 2020 Europe Stadium tour is officially rescheduled to 2021 The making of a photo session for the last album New book by Till Lindemann and Joey Kelly Documentary with Flake and Joey Kelly on Arte.tv Rammstein's Europe Stadium tour 2020 will not take place New official communication about the 2020 tour 2020 tour: Rammstein is monitoring the situation Official statement regarding Till
Back to top