Richard owns since 2005 an ESP signature guitar. The first version is available in "Titanium" finish and then in the 2009 Musikmesse in Frankfurt are presented two new colors, "Olympic White" and "Satin Black". It is used in drop C during the Reise, Reise tour, then in standard thuning, drop C or drop D sur le LIFAD tour.

The RZK-II marks the revival of the Richard signatures. Only the "Burnt" finish is marketed, but Richard has a "Titanium" finish that can be seen in the Pussy video.

Richard uses this acoustic guitar only in studio.

Richard uses a Shure Super 55 Deluxe microphone mounted on a telescopic leg which getting up or down with a pedal.

Richard's sound engineer, Lutz Buch, describes on this video the gear used by Richard during the LIFAD tour.

Richard created in 2010 with Native Instruments an amp simulation software, which creates a sound close to his. Richard uses Rammfire to record his demos.

You can click on the links to see the guitars without leaving the page. 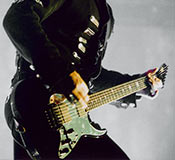 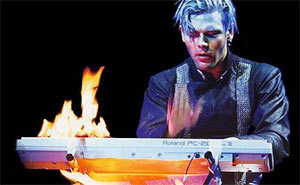 During the Made In Germany tour, he uses an Alesis QX49 keyboard to launch the samples of the Bück dich introduction.