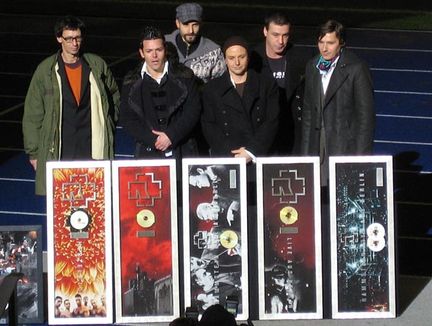 In December 2005 was organized an extraordinary awards ceremony. Inside the beautiful and mythical Olympiastadion, Rammstein received a "World Sales Awards", formalizing the sale of 10 million copies since 1995 all media throughout the world.

More than 10 million albums, DVD, and singles sold, would be the envy of more than one artist, and reflects the tremendous success of Rammstein, not only in its country of origin but on every continent. That success in confirmed by the number of certifications won by the band.

Certifications are awarded by a different agency in each country. The awards are represented by the names of some materials: gold and platinum in all countries, silver and diamons in some. We have chosen to display here the certifications won by the band in german-speaking countries only, because the IFPI, publish the history of certifications in those countries. But be sure that Rammstein won certifications in a large number of countries.

The following table summarizes for three countries, the number of copies that one artist must sell to win each certification.