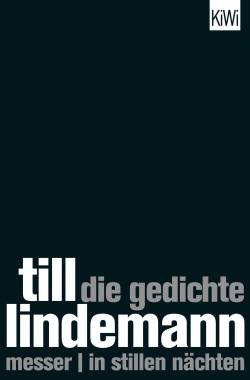 Die Gedichte is a book by Till Lindemann, published on March 5, 2015. It is a pocket-sized compilation of poems already published in his previous books Messer and In stillen Nächten. The book also contains black and white illustrations by Matthias Mathies.

The poems that were named after their first verse in Messer now have a real title:

Till Lindemann is best known as the singer (and lyricist) of the band Rammstein. Less well known is that he has independently been writing lyrics for over 20 years - poems, some of which have become songs, but which as poems have their own life. In the last 10 years two volumes of poetry have been published (Messer, 2005, and In stillen Nächten, 2013), which are now available together for the first time in a paperback edition. These often almost casual, yet rhythmically and musically precisely constructed texts, in which an abysmal, irritable, vulnerable lyrical ego enters into an intimate dialogue with the reader, sound most astonishing. Among them are poems which - as the editor of In stille Nächten, Alexander Gorkow, writes - sound as if they were scraped out of the ice in cold nights, but also those full of melancholy, longing and sentimentality. The motifs revolve around the abysses of existence, the hunger of desire, the body, pain, lust, the comedy and tragedy of communication, loneliness and violence. In addition to the poems, as illustrations, the volume contains a series of black and white drawings by the artist Matthias Matthies.

Preview of the book