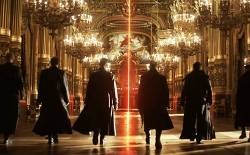 Director
Specter Berlin
Shooting place
Opéra Garnier, Paris; Studio in the Paris suburbs
Shooting date
from May 2, 2022 to May 4, 2022
Duration
8:49

Adieu is the fifth video from Rammstein's eighth album, Zeit. It was directed by the German director Specter Berlin, who had already directed Deutschland. The video was shot at the Opéra Garnier in Paris, as well as in a studio in the Paris region.

Here is our interpretation of the video. It is not official and it is not the only one, of course. Everyone is free to make their own opinion!

The plot takes place in the future; Rammstein has retired. The record company, Universal Music, has managed to create clones of the band that they keep alive in cryogenic chambers, in a protected room. We imagine that they bring them out from time to time to exploit them. The real members of the band, who have become religious anarchists, decide to finish with these clones. They attack Universal Music and manage to destroy them by burning them. But when they come out of the chamber, they are killed (or commit suicide?).

They are then taken to the Last Judgment (the scene where they fly away in a whirlpool). Having committed murders and having lived adulated (pride is a capital sin), they are condemned to end up in hell, and accept their fate by falling into the hole that leads there.

In hell, the punishments are adapted to the sins committed. In their case, they find themselves locked in a cage, beset by damned souls, a metaphor for the time when they were adored and gave concerts. The only way to serve their sentence is to accept that they will no longer be stars in the afterlife. They have no choice but to destroy the giant statues that represent the idols they were. This also destroys the damned souls that represent the fans.

We see the first scene in hell before we see the scene of the Last Judgment, but Specter Berlin was obliged to change the narrative order, because of the structure of the song.

Many references to Rammstein's past or to popular movies are present in the clip. Here is a non-exhaustive list:

« Pommes Frite » and « Herzwerk R.o.D », two members of our forum, had the chance to participate in the shooting of the video, as extras. They were kind enough to write a testimony to give us their impressions! It's in French, sorry, but you can use online tools like Google Translate or DeepL to read them.

A first trailer was posted on YouTube and social networks on November 21 at 17:00 CET. Two others followed at the same time the next day and the day after. Finally, a fourth trailer was published on the morning of the video's release, at 10:00 CET.

During the premiere on YouTube, a countdown was broadcast. It starts from the last image of the Deutschland video, where we see a coffin in space and a red laser that escapes from the Earth. In the shots that follow, we realize that the laser is in fact emitted from the Opera Garnier in Paris, which makes the link with the Adieu video.