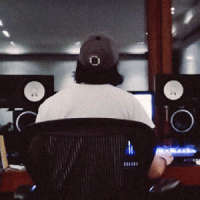 The German producer Sky van Hoff posted this message on his official blog, saying he is currently working with Rammstein:

This actually happened, it's an absolute blast for me as a musician, music producer, human being to work with a band I've been listening to since I was about 13 years old. A great week in Berlin with even better people! More to come!

Today, it's impossible to tell if Sky van Hoff will be Rammstein's producer for the new album, instead of Jacob Hellner, Rammstein's traditional producer. It's possible that Rammstein is only trying new things, as they indicated in a interview last month:

We even try unusual methods, new ideas, and change the path that one usually has. We might consider another producer.