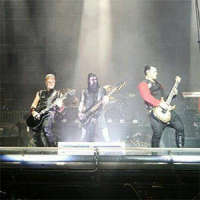 The first Rammstein concert of 2017 ended a few minutes ago in Iceland. The stage and setlist are identical to last year. Only a few costumes have been slightly modified, as well as one pyrotechnic effect.

Many of us were waiting for changes, but the fact that no public rehearsals were organized, showed that Rammstein planned this tour as a continuation of the 2016 tour. Maybe to better focus on writing the next album?