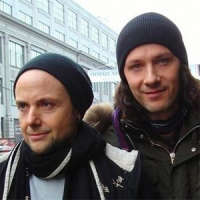 A new interview with Paul Landers and Christoph Schneider was published by the British website The Independent.

Both confirm that 28 song ideas have been retained so far for the new album, including 24 with lyrics. Some are bare-bones of songs, some are practically finished. There will be no double album, so the band will keep only the best songs.

Oslen Involtini (arranger for Rammstein since Mutter, live sound supervisor, co-producer for Emigrate), supervises the writing sessions. The producer of the record has not yet been chosen (it will not be Involtini, as a reminder it could be Sky van Hoff). Schneider explains:

Olsen is a good friend of ours. He has a lot of good qualities so we brought him in to lead the rehearsal and work through the songs with us. If two of us disagree, we take the direction that he likes. Often we would get lost in the making of something; there would be 20 different versions of a song and he would help us to focus on what was working and what was not.

Paul tells that the band has long been afraid to start writing this new album, as the tensions had been strong for the recording of Liebe ist für alle da (2009). Till and Richard released their solo projects and they did not really want to go back to the studio, but the band finally got to work. Paul explains:

We said "Let's just do three or four songs first and see how it feels with no pressure." And it felt good and now we have 28 song ideas. You're trying not to change your friends or colleagues anymore, you accept them more as they are and give them the space they need. It's close to unbearable harmony in this band at the moment (laughs)