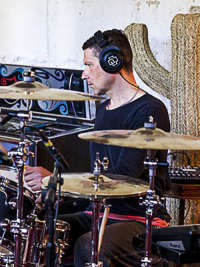 After a composition and pre-production phase of about 2 years, interrupted by tours and breaks, Rammstein took possession of the studios "La Fabrique", near Nîmes, to finalize the songs. Rammstein already recorded an album in France: Mutter in 2000.

The recording is scheduled until the end of May. Then will follow the mixing and mastering phases. The album is scheduled for release between late 2018 and early 2019.

Here are a few photos of the recording!
Shooting confirmed in Mexico City Additional concerts for the 2023 tour Europe Stadium Tour 2023 31 December concert: Rammstein will not play in Munich Concert on December 31: Munich agrees Mexico City concerts filmed for a live release? The 2023 tour is official, dates coming soon! A New Year Eve's concert in Munich in front of 150,000 people? Single Angst on August 26th North American Stadium Tour: Meet&Greets and guided tour
Back to top