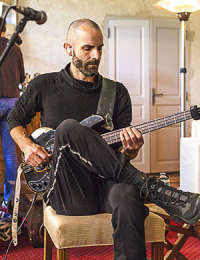 Since a few days, we knew that Rammstein had left the studios La Fabrique, near Nîmes, France, where was recorded the successor of Liebe ist für alle da. Peter Tägtgren (Till's accomplice for his project Lindemann), confirmed in an interview that Rammstein has indeed completed the recording!

The plans are now simple, even if the exact schedule remains to be determined: the album will be mixed and masterized, and should be released at the end of 2018 or early 2019.