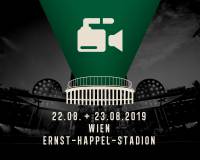 Rammstein's management has just announced the cancellation of the Meet&Greets in Vienna's Ernst-Happel Stadion, on August 22 and 23, 2019:

The Meet&Greets in Vienna on August 22 and 23, 2019 have to be cancelled due to production reasons. Due to a show recording scheduled at short notice, the realization of the Meet&Greets is not possible, which the band deeply regrets.

The concerts are usually filmed by Rammstein's production team, notably to feed the stage's screen. But according to the management's message, Vienna will be filmed with more consistent material. This does not mean that these concerts have been chosen for Rammstein's future live release. Other concerts could be filmed next year.
Till celebrates its 60th birthday! Happy New Year 2023! Flake on the 2023 tour: same stage, new songs Interview about Zeit's Dolby Atmos mix Zeit is gold-certified in France and album of the year in Germany Video for "Adieu": interpretation, references, testimonies of extras « Adieu » video premiere Interview with Sky Van Hoff about Richard's live sound Next single: Adieu ! Olaf Heine: « Human Conditions »
Back to top