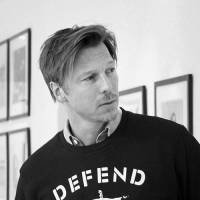 Olaf Heine, one of Rammstein's most emblematic photographers, will release a book entirely dedicated to the band on October 14, 2021. 364 pages will retrace 25 years of collaboration and will allow us to contemplate photographs for the most part unpublished.

As massive and spectacular as the band itself, this celebration of all things Rammstein features the impeccable work of German photographer Olaf Heine.

Arguably the most exciting live musical act in the world, Rammstein has been playing together for more than 25 years-- and Olaf Heine has been photographing them every step of the way. This massive and gorgeously produced celebration of the band features exquisite, mostly unseen images from every aspect of their decades-long history. There are, of course, dozens of concert shots featuring fireballs and fire- consuming costumes in enormous arenas packed to the gills with ramped-up fans. But Heine also ventures beyond the stage with individual portraits of the band, stripped of stage makeup and machinery; domestic scenes from their native Germany, and intimate glimpses inside the recording studio. One of the world's most sought-after photographers, Olaf Heine also creates masterful still-lifes and landscapes that give context and contour to the band's hard-living image. Fans will pore over close-ups of the complexly constructed costumes, outré stage props, and other artifacts that can't be appreciated from the stadium floor. Rounding out the volume are texts from the band members themselves. The book that millions of fans have been waiting for, this love letter delivers--in true Rammstein fashion--all they could want, and more.

Concert on December 31: Munich agrees Mexico City concerts filmed for a live release? The 2023 tour is official, dates coming soon! A New Year Eve's concert in Munich in front of 150,000 people? Single Angst on August 26th North American Stadium Tour: Meet&Greets and guided tour Photos of Lyon and the Europe Stadium tour 2022 A forthcoming documentary on the history of the band? Lyrics and translations of the album « Zeit » Single and video for "Dicke Titten"
Back to top