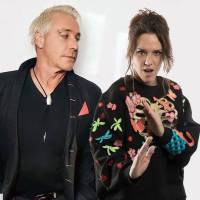 According to Russian sources, the shooting of the video for the song "Le Jardin des Larmes", a duet with the French singer Zaz, has started.

The shooting is taking place over three days in Bukhara, Uzbekistan, and is supported by the Uzbek Ministry of Tourism and Sports. A film crew from Russia, actors from Bukhara and stuntmen from the city of Tashkent are involved. According to RammWiki.net, the director of the video is Zoran Bihać and the song is in French with some German verses.

The release dates of the song and video are not yet known.
Shooting confirmed in Mexico City Additional concerts for the 2023 tour Europe Stadium Tour 2023 31 December concert: Rammstein will not play in Munich Concert on December 31: Munich agrees Mexico City concerts filmed for a live release? The 2023 tour is official, dates coming soon! A New Year Eve's concert in Munich in front of 150,000 people? Single Angst on August 26th North American Stadium Tour: Meet&Greets and guided tour
Back to top