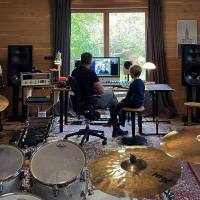 It sounds like one of our traditional April Fools' Day stories, but it's not! Christoph Schneider explained on Instagram that he was able to chat for a while with Thomas Pesquet, the French astronaut currently on board the ISS.

But the story doesn't end there: Thomas Pesquet will make all Rammstein fans jealous. He had the privilege of listening to the next Rammstein single, from space! The band's eighth album is indeed finished and will be released in 2022. The first single could be released by the end of the year; the video was shot a few weeks ago in Austria.
Shooting confirmed in Mexico City Additional concerts for the 2023 tour Europe Stadium Tour 2023 31 December concert: Rammstein will not play in Munich Concert on December 31: Munich agrees Mexico City concerts filmed for a live release? The 2023 tour is official, dates coming soon! A New Year Eve's concert in Munich in front of 150,000 people? Single Angst on August 26th North American Stadium Tour: Meet&Greets and guided tour
Back to top