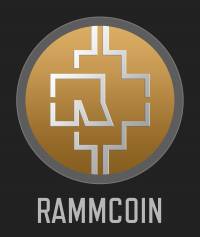 Rammstein will launch its cryptocurrency, RammCoin, on April 29, 2022, alongside the album Zeit.

Some activities, such as listening to Rammstein songs in streaming, or buying merchandising on the official shop, will reward you with RammCoins. The currency will not be only speculative: the purchase of consumption (drinks, food) on the upcoming tours will be done exclusively with RammCoins: We thus wish to reward our most loyal fans by favoring them over those who will use a classic currency, the band told.

The value of RammCoin at its launch as well as all the details on how it works will be revealed later.

This was of course for April fool's day!
Till celebrates its 60th birthday! Happy New Year 2023! Flake on the 2023 tour: same stage, new songs Interview about Zeit's Dolby Atmos mix Zeit is gold-certified in France and album of the year in Germany Video for "Adieu": interpretation, references, testimonies of extras « Adieu » video premiere Interview with Sky Van Hoff about Richard's live sound Next single: Adieu ! Olaf Heine: « Human Conditions »
Back to top