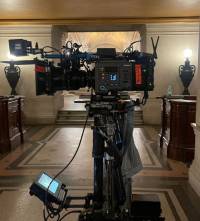 Instragram stories, as well as castings gleaned from the web, allow us to confirm that one of the band's upcoming videos was shot in Paris on May 3rd and 4th. The video was directed by Specter Berlin (who directed Deutschland) and produced by Dissidence Production. The director of photography is Khalid Mohtaseb and the executive producer is Charles Portier.

The filming took place at the Opéra Garnier and then in a suburban studio.