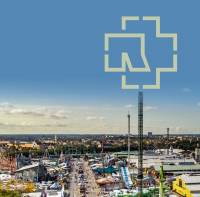 According to the Süddeutsche Zeitung newspaper, Rammstein has asked the city of Munich for permission to hold a unique New Year Eve's concert on the Theresienwiese. The city is expected to give its approval in August.

The Theresienwiese is a 42-hectare square where the Oktoberfest takes place in September. The concert could bring together up to 150,000 people and even be streamed online, according to Munich's tourism chief.

According to the Süddeutsche Zeitung, another venue in Germany could host Rammstein that day: the Zollverein in Essen, a former mining site. But the Theresienwiese is the band's favourite.
Video for "Adieu": interpretation, references, testimonies of extras « Adieu » video premiere Interview with Sky Van Hoff about Richard's live sound Next single: Adieu ! Olaf Heine: « Human Conditions » Rammstein's initial stage design in stadiums revealed Report on the Mexico City concerts Shooting confirmed in Mexico City Additional concerts for the 2023 tour Europe Stadium Tour 2023
Back to top