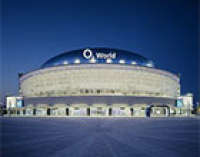 A concert has been announced at the O2 World in Berlin on December 14, 2011, in addition to the two dates already scheduled for November in the German capital. The sale takes place here.