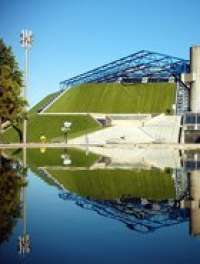 Rammstein has long sought to film a concert in Bercy, a venue at Paris. This will be achieve next week, as the two concerts of March 6 and 7 will be shot! This confidential information circulated for several days and was made public by the French magazine Rock Hard.

In 2005 at Bercy, Rammstein had been forced to cancel at the last minute the shooting, for technical reasons. This led the band to return in Nîmes during the summer, to shoot Völkerball.
Video for "Adieu": interpretation, references, testimonies of extras « Adieu » video premiere Interview with Sky Van Hoff about Richard's live sound Next single: Adieu ! Olaf Heine: « Human Conditions » Rammstein's initial stage design in stadiums revealed Report on the Mexico City concerts Shooting confirmed in Mexico City Additional concerts for the 2023 tour Europe Stadium Tour 2023
Back to top