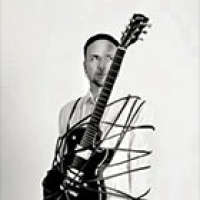 In a French interview conducted by Ouest France, Paul Landers gave some interesting information about the future of Rammstein. The guitarist said it was too early to talk about a new album, and the band will begin to think about it next year. He also confirmed a live DVD, but above all, talked about a documentary film.

First we'll take a break. We will take our time. For now, it is very vague. We'll start thinking about it next year. We are on a couple of projects: a live DVD and a documentary film in cinemas.