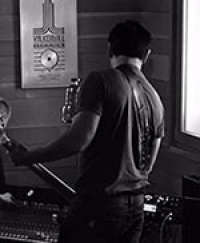 Some information circulated about Rammstein's next album, following the publication of an interview of Paul and Richard during the promotion of Rammstein: Paris. We would like to clarify the situation, as some websites misrepresented what Paul and Richard said.

First of all, Richard talked about 35 new songs. Be careful, these are not 35 finished songs. Each album creation begins with a pre-production phase, during which the group seeks to find inspiration. During jam sessions, Rammstein puts some ideas aside (full songs, riff, keyboard samples, lyrics, etc.). Some ideas will turn into songs, others will be merged and the rest will be dropped.

So the future album will probably contain 11 songs, as usual. Of course additional songs could be recorded for a future EP or singles, or to be added as bonuses of the album.

Some websites also reported that Paul talked about 6 good songs. This is wrong, Paul simply said: the likelihood that the album will be good is high, since the band already has six good ones (talking about albums).

It is difficult to know the exact advancement of the album. Rammstein is working on it since fall 2015, so a few songs are probably mature. The band could play some new songs this summer, live.