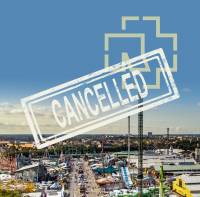 Rammstein will not play on 31 December in Munich in the end (see our original article). The municipality had given its approval, but the organiser and the band decided not to go ahead with the project.

Thanks to articles from SüdDeutsche.de and MediaBiz.de, we learn that the band and organiser Klaus Leutgeb had initially asked to play at the Munich Exhibition Centre. The request was refused, so they approached the Munich city council to play on the Theresienwiese.

It was at this time that the information leaked to the press. This led to a heated political debate and objections from the authorities, the police and the emergency services regarding security. Despite the Munich's agreement a few days later, Rammstein and the organiser decided not to go ahead with the project, deploring the political manipulation they had been subjected to, and pointing out that Rammstein never made a commitment or signed a contract.

It remains to be seen whether there is any hope of Rammstein playing on 31 December. The band and Klaus Leutgeb had indeed made requests in cities other than Munich.
Shooting confirmed in Mexico City Additional concerts for the 2023 tour Europe Stadium Tour 2023 31 December concert: Rammstein will not play in Munich Concert on December 31: Munich agrees Mexico City concerts filmed for a live release? The 2023 tour is official, dates coming soon! A New Year Eve's concert in Munich in front of 150,000 people? Single Angst on August 26th North American Stadium Tour: Meet&Greets and guided tour
Back to top